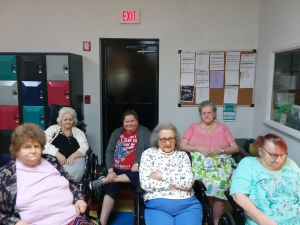 Real Quality of Life is when elders go from bed bound and one on one in room activities to groups and outings!!! Mrs. Dorothy had spent a lot of time in the bed prior to coming to our facility. When she got to our facility it was the expectation that she would remain bed bound d/t medical issues. We began one on one with her, encouraged her to pursue independent activities as we provided puzzles, books and television for her. Her roommate was encouraged to share her talent for playing the guitar and singing and she engaged Dorothy. Soon the two began playing games together in room and talking. By and by Mrs. Dorothy spirits began to soar. Activity staff began bringing the group to Dorothy even pulling her bed into hallway so that she can join the group. Working as a team activities, the family, therapy, nursing and the doctors made Dorothy’s dream come true. She is now attending group activities daily and went on an outing to the bowling alley and out to lunch. She had never bowled before and she was the high scorer of the group including getting a strike. Great job Dorothy and great job team.